I have chosen a mid-drive as the best tool for the job on this bike.  It will not only be hauling cargo, it has to be able to do it in a steep hilly area.  If I was building for flat ground, a maintenance-free direct drive hub around 1.5-2kw would be the answer.

I’m not doing that though.  So mid-drive it is.  Now, which one?  there are plenty on the market and I have owned and in some cases still own several different ones.

Originally when I was planning this article, I was going to describe all of the major players in the market, and why I chose the one I did.  Instead I’ll limit my scope to the top two choices to better stick to the subject.

This should be the first choice for most people.

I do want to say that as far as I know, as Bafang’s largest USA dealer, only Luna Cycle sells a BBS02 I would want to buy.  Luna uses their buying power to spec more robust controller internals that keep the BBS02 from frying its controller under sustained load … that was something of a known drawback of these motors in their heyday.  Also, Luna’s pricing strategy means their BBS02 kits are among the cheapest, if not *the* cheapest, BBS02 on the USA market.

Bafang mid drive motor kits are at the bottom of the the difficulty curve in terms of installation.  With one of these, you can have a bike up and running in an afternoon.  You’ll find a zillion Youtube videos and blog entries telling you what to do and how to do it, as well a multitude of experienced users in online communities ready to help you through whatever specific, quirky question you may have. 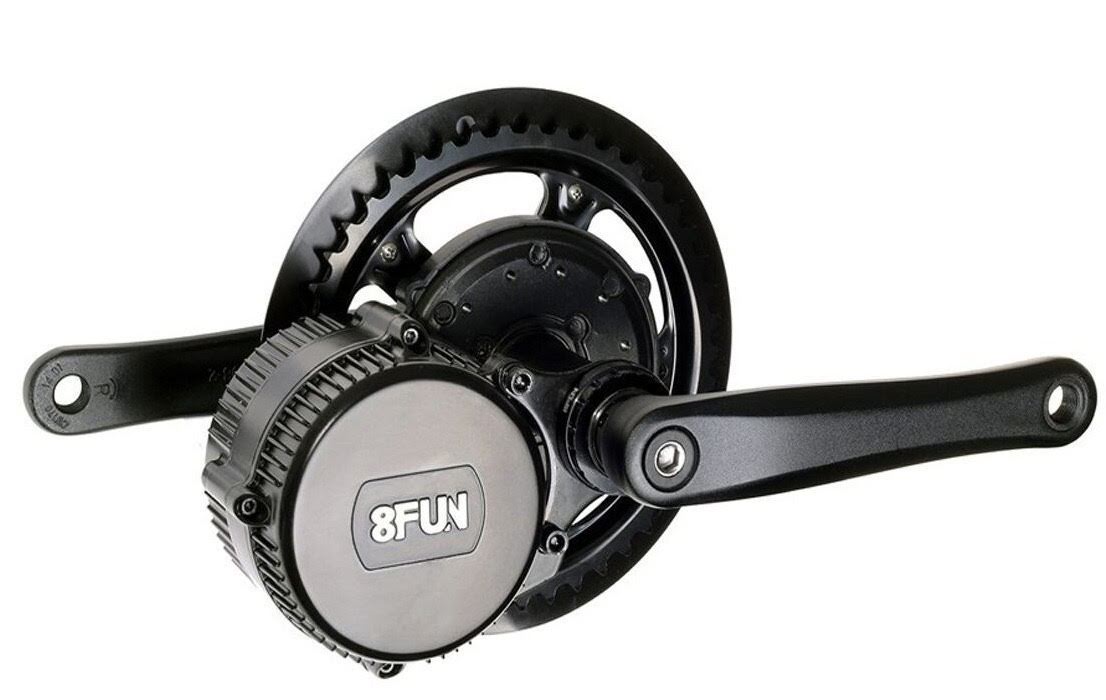 Sidebar:  Bafang is a mainland Chinese motor manufacturer that is essentially the 800 lb gorilla of ebike motor manufacturers.  If you think companies like Bosch are market leaders, their volume is a fraction of Bafang thanks to their massive installed base in the Far East.  Bafang motors, while not perfect, are typically overbuilt, rugged, dependable and not very exciting.  Workhorses.  Chinese products have a reputation for ‘optimistic’ spec sheets and shaky quality.  Bafang is pretty much the opposite of that.  They underreport their motors’ capability – It seems one reason for that strategy could be so they can sell the same motor with different power ratings, with a higher price point for the ‘bigger’ one.  Again they are not perfect by any stretch, but for the beginner, working with a USA dealer of their products (do NOT be tempted to buy cheaper from an overseas vendor), its hard to go wrong.

The ’02 has been around for awhile, and what is sold as the ‘BBS02’ in the USA amounts to Bafang’s first effort at a kit offering (you can still buy BBS01’s – mostly overseas – and they are essentially a low-power BBS02).  It has long since been eclipsed in terms of power, and its aftermarket support for upgrades is not what you find for its successor, the BBSHD, but still the ’02 remains a rock solid product (IF you heed the caveats above).

A 750w or 1000w ’02 would have been my motor of choice for this project, except I already own two other BBSHDs.  As such I decided to keep one set of common parts across the fleet, so to speak.  I went with the more powerful next generation: the BBSHD.  More on that below.

Another Sidebar:  If you see these motors with the label ‘8FUN’, thats Bafang’s house label.  Usually those motors were manufactured for sale overseas in the Far East.  You can also find BBS02’s and BBSHDs with private labels on them.  Thats common.  Bafang will sell a private-labeled motor to anyone who will give them a big enough order.  Some vendors – like Luna Cycle, Bafang’s largest USA dealer – private-label and sell at a competitive price to builders.  Others just add their own label and crank up the price.

Bafang updated the BBS02 with the BBSHD (its called the BBS03 in some overseas markets).  The ‘HD is essentially more of everything you get in the ’02.  More robust.  More aftermarket support.  More power.  And more money.  But its still a bargain, with a bare motor running around US$450.  A complete kit providing you with everything you could ask for, plus programming upgrades (Bafang motors have a robust capability to customize their behavior, ranging from total power output to precise tailoring of each of the 9 pedal assist levels). should run you about $750 before you get to the battery. 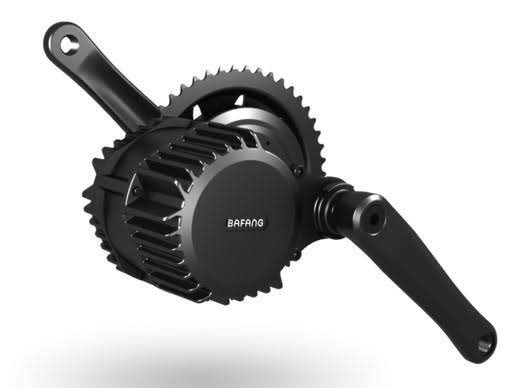 Myself, I paid less than that simply because I already have two other bikes that use this motor, and I have quite a few spare parts on hand.  I can just pick stuff up off the parts pile for zero added cost.

You’d think this motor sitting in front of the bottom bracket like a giant wart would be obvious to people, but it turns out it isn’t.  Oftentimes, I get asked “Is that thing electric?” and when I point out the motor I see the questioner’s eyes light up in surprise.  So visibly it doesn’t stand out to people.  Especially since I keep the battery in a triangle bag – not to keep that part stealthy, but because that makes it easy to haul out and carry into the store with me.

The next component of stealth on an ebike is sound.  How loud is this motor?  To all intents and purposes, the motor is completely silent.  If you fire it up on the workbench, they definitely make an audible whirring electric-motor noise.  But on the road, even at the slowest speeds with no wind noise in your ears… you’ll be lucky to hear a slight hum.  And anyone next to you – like that poor sap you cruise by while he struggles up the hill in his analog bike – they won’t hear anything either.

How To Build An Ebike From Scratch: Tinkering

We crawl one step further: confirm as best we can that motor will fit, then buy and test-install it so we can take more measurements.

How To Build An Ebike From Scratch: Hunting

We figured out what kind of bike and frame we wanted in the previous step. Now its time to hunt down that frame.