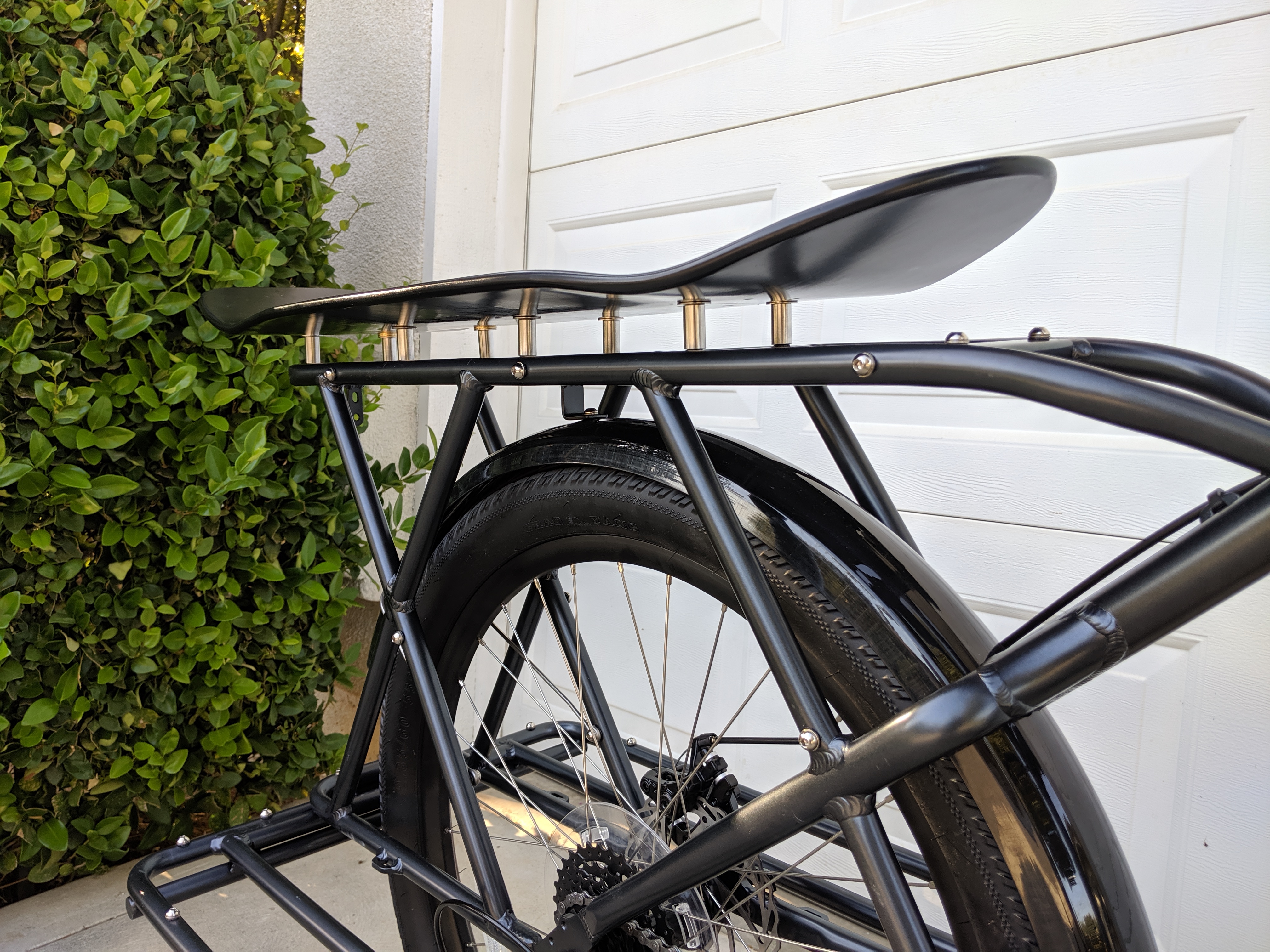 The Envoy’s rear rack is about 27″ long and 6″ wide.  For a cargo hauler, I wanted it to be able to handle more.  The rear deck is very low over the back wheel, and thanks to my inseam, the seatpost is going to be set high.  Add all that up and you have a lot of available vertical room for cargo mounted on top of the rack.

We can do better than 6″ wide.  Especially since Mongoose has dotted M5 bosses seemingly everywhere on the rear of the frame.  I just did a quick count and saw 32.  And thats not counting the 4 additional lower rack bolts you can piggyback onto.  Also not counted are the 12 brazed-in hook mounts for the included panniers (that I’m only temporarily using due to their frustrating 6″ depth).  So what does that come out to?  This bike has 50 (fifty!) discrete attachment points.

This thing is begging for home brewed solutions so lets come up with one.  I don’t want just a regular deck on top of the rack, I want it to be wider than six inches so its a bona fide cargo platform.

My buddy Houshmand finished up his custom cargo bike build a few weeks ahead of me, and one of the things his framebuilder did was haul a skateboard deck off of his shop floor and decide it looked like a decent rack deck.  I agreed and informed my friend I would be stealing this idea.  So I did.

I started looking for a bare longboard deck.  I found decks as large as 48″x9.5″ for a dancer style, but it was something that doesn’t quite have that cool skateboard look I was going for.  I ended up settling on a 33″x10″ double kick deck that, while it doesn’t fully extend across the entire rack, its overall concave surface provides a sort of natural cradle for the duffel bag that will be cargo netted down to it.

The shorter 33″ deck also isn’t long enough to use all five sets of M5 bosses, but the four it does use it fits to perfectly.  Part of the concept I wanted was an overhang to the rear to ensure my back side stays dry if riding in the rain, and the board is bolted down to its most rearward flat location as a result.  Really it would not have fit well further forward or backward unless I shifted to the front four bosses and moved it quite a bit forward.

For hardware, I went to my old-standby for weird fittings: McMaster-Carr.  I know from previous projects they sell metric spacers in a variety of sizes and increments, and I had no trouble finding them in a wider 13mm diameter size.  However, my usual choice of stainless steel resulted in a hefty price tag.  I found they offered the same sizes in alloy which is perfectly fine for this application.

My original choice of 30mm spacers turned out to be problematic as well.  That size in 30mm x 13mm diameter isn’t stocked, so delivery is measured in weeks.  However, 25mm was available for next day delivery, and the cost per unit was about half what the 30mm’s would cost me.  Sold.

Ordinarily I will use socket caps on a job like this, but their squared-off and tall caps aren’t the best fit here.  I also did not want to mess with countersinking holes on the deck itself.  Besides, for durability I wanted metal to metal contact, not metal to wood.  In the end I decided on countersunk Phillips head bolts (50mm), with countersunk washers sitting on top of large-area stainless washers – the latter to distribute the clamping force across as much of the board as possible.  Under the board, between it and the alloy spacer, is another large-area washer to help further stabilize the connection.  Multiply this by 8, torque to a modest 4 Nm (the threads in a frame boss, which could be alloy themselves, are not the sort of thing you want to apply serious torque to) and you have something solid enough to sit on, that is completely rattle free.

After this article was written, I substituted longer, 60mm hex drive screws.  the added length gave me max thread engagement in the boss, and the countersunk hex head… looks nicer.

Drilling the board to get the result above was a minor adventure.  I discovered quickly that the frame bosses were all, well… totally uneven.  You might be able to see a little of that in the picture above but I assure you the photo above is deceiving.  Its worse than it looks in the picture.  Trying to graph out a precise template that would then map perfectly to the board was clearly a Pain in the ass I didn’t want to suffer.  So I tried to think of a way to put something pointy in the hole so I could see marks directly on the board.  Stuff like finishing nails or similar just didn’t have the precision to sit perfectly centered in the hole.  And then I remembered grub screws.  “What the hell is that?” you ask?  Let me just show you.

They were delivered to me next day by Amazon.  I chose the longest ones I could get my hands on so I would have plenty of thread engagement to get them to center up.  And they worked splendidly.  After I used painters tape to cover my likely drill areas on the deck, (helps keep the wood from splintering), all I did next was screw in one of these screws, pointy side up, into the outer four boss holes, I then gently centered the board atop them just right (I tried measuring frame overhang and in the end just eyeballed it) … and pressed down.  Instant markings on the board, and my drill holes are already started.

Next I drilled the four marked holes, flipped over the board and test fit the screws to the rack.  Perfect match.  Now for the four inners:  I screwed the board down with the four outers I just drilled.  This gave me perfect positioning on top of the four inner holes … which now had pointy grub screws in them.  This in turn pressed the board onto the pointy bits.  Once done, I again had a set of marks that were perfectly aligned with an installed board.  Using the new marks I drilled again and perfect fit again.  The rest was just inserting the rather fiddly combination of spacer and washer under the board.

The end result works well I think.  I want the load’s center of gravity moved back a bit, effectively giving me a longer tail than I really have, for the top load, at least.  Additionally I still have a fair bit of unobstructed rack up front to play with.  When I put together my pannier solution, I have the option of using those standoffs, as well as what is now the ‘lower’ rack surface, for anchor points.

We went over the parts list in Part 1, now its time to get down to business and make some panniers.

Commercial products are available but are priced at US$300 for a pair. This alternative offers more space for minimal cost, needs only a few simple tools and can even be assembled in a few minutes.